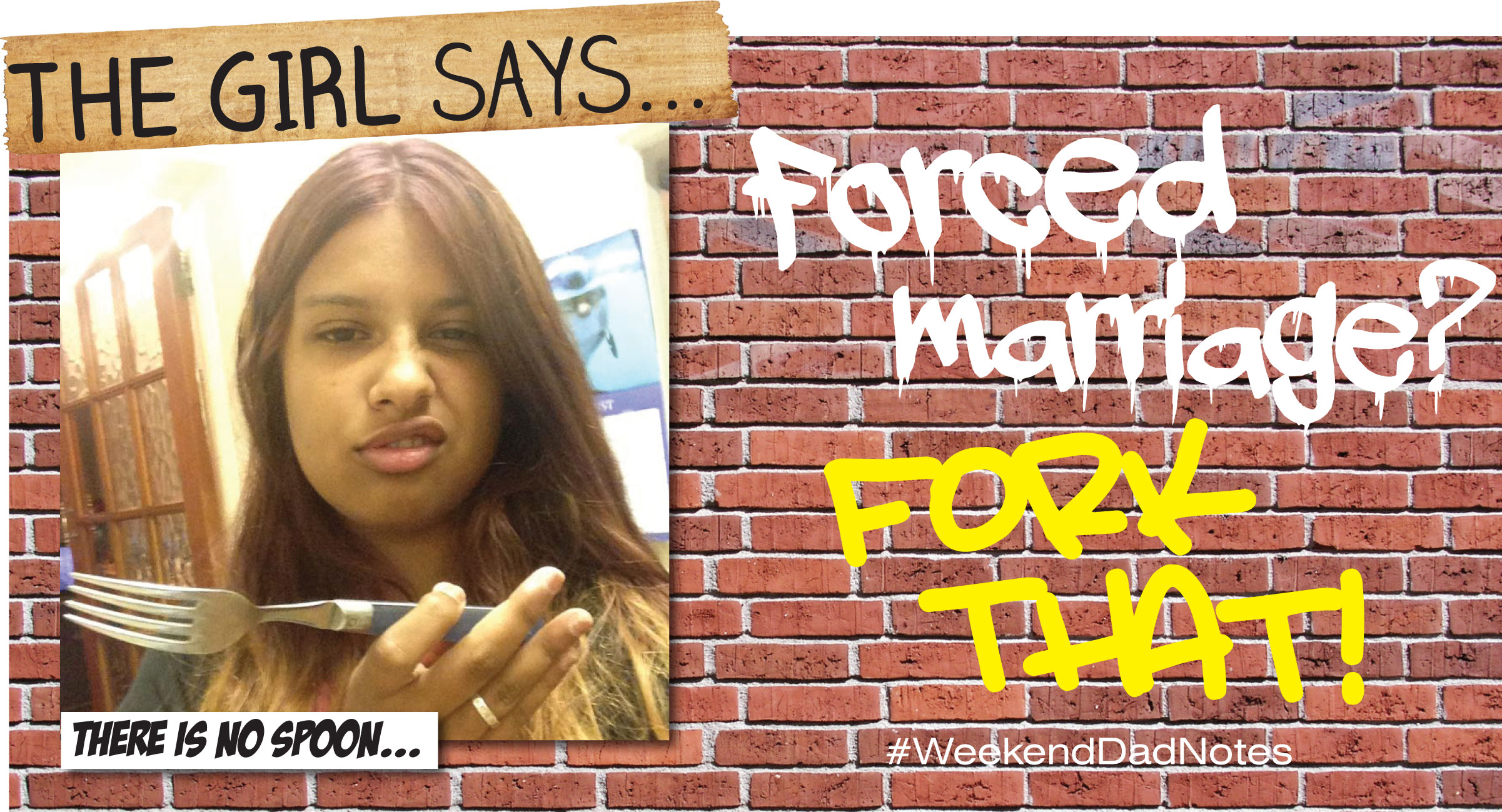 Heard the one about the Asian girl with the spoon in her pants?

I wish this was a joke, but it’s all too horribly true. Young girls walking the Green Mile to marriage are being advised to carry concealed cutlery to set off the alarm in the hope airport staff will save them from a forced union.

Whenever I read a story like this, I’m tempted to say to The Girl, ‘see how nice I am to you?’, semi-expecting to receive all sorts of medals. But that would be ridiculous. I wouldn’t appreciate someone telling me that even though he has the power to smash my face in and ram a brick up my arse, look, he didn’t, see how nice he is? No, deciding not to mess up another person’s life doesn’t make you nice – it makes you civilised. So you’re not a vicious, sadistic prick to your children? Well done. Have a samosa.

Now, let’s not get stuck with any silly notion that being evil to your kids is an exclusively Asian thing – non-Asian kids might not need to carry spoons in their pants, but psychotic parenting means a hell of a lot of them carry knives instead. That said, it can’t be denied that even the most controlling black or white Working Class Dad wouldn’t dare to assume he has any sway when it comes to choosing who his kids end up shagging. The Asian Dad, on the other hand, thinks he’s Aphrodite, Parvati, Cilla Black – the God of all matchmaking Goddesses. Hell, I wouldn’t trust my dad to pick me out a pair of socks let alone find me the woman I’m meant to spend my life with.

When we launched (the now defunct) Asian Woman back in 2000, a magazine aimed at the modern British Asian woman who chose her own career, picked up her own men and downed her own cocktails, I banned any features that banged on about:

Much like Queen Vic finding lesbianism inconceivable, I found it improbable that the sort of strong, successful Asian women I was meeting through my work every day could possibly succumb to a life of incarceration and servitude. I was right and wrong.

Right because the majority of Asian women are indeed strong and have no qualms about telling their meddling folks to stick their suitable match up where the squirrels hide their nuts. But, alas, wrong, because this shit still happens to the girls who aren’t strong – the vulnerable, the kids, the ones raised with their self-confidence eroded at every turn by unenlightened oafs with an unhealthy obsession with their daughter’s virginity, folk too thick to understand the basic tenets of parenting, culture or religion. Because nowhere in the holy book does Allah say one should drag a child to a foreign village, drug her and keep her chained in a locked room until she agrees to go home with an inbred rapist.

I can’t think of anything creepier than me wanting to have a say in who The Girl decides to bed. I feel fully within my rights to comment on the kind of men she shouldn’t consider – perpetrator types, religious freaks, Drake fans – but there’s something deeply weird about me going out on a mission to arrange for a man to have sex with my daughter.

Just as I can’t expect a badge of honour for not frogmarching my girl into a mandatory marriage, I won’t be holding out for a knighthood for raising her to know that no man ever gets to have a say over what she has inside her pants.

I’m just glad it doesn’t have to be a spoon.