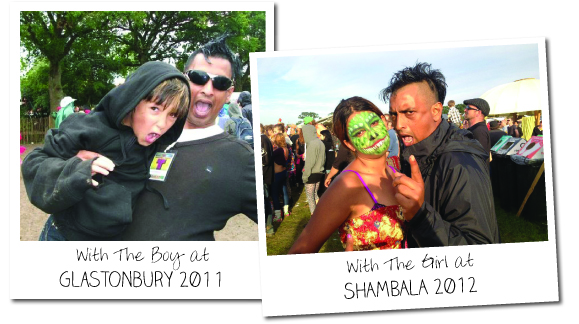 Some guys encourage their kids to recognise sports cars. I showed mine how to spot the drug casualty. It seems to have hadthedesired effect on The Girl. While her peers are stumbling through the transition from Inbetweeners to Skinsby tripping the white fantastic, to her it’s the frankly banal equation: Father thinks drugs are kinda cool = so not cool.

I’d like to point out I didn’t thrust her from the cradle to the rave without giving it careful thought, but I can’t. I fathered her when I was stupidly young and took her to her first festival because that’s where I was going that weekend. I sat her on my knee in a field, she started bouncing, and that was that. I’ve been taking her along to festivals ever since, and she’s hands down the coolest, most sociable girl you’ll ever meet. Plus she has the most excellent iPod playlist any 16-year-old can boast of. I’m having that.

Festival Raising hasn’t gone quite so swimmingly with The Boy. Girls love to shop and bond, which pretty much covers all that anyone does at festivals: trot around from stall to stage, chatting endless shit. The Boy, on the other hand, wants to play.

There are rides, and oh dear lord, there are workshops. Alas, a nine-year-old boy will always behold the wind powered wooden carousel and the fervent invitation to bang a spoon on a pan with the utmost disgust. You need a lot of drugs to find the festival fairground in any way enticing.

He’s never quite grasped why we have to be in a field with no laptop or Xbox, where Daddy’s usually charming friends turn into gurning maniacs, although the doughnuts for breakfast is a nice touch. The Boy does like that Daddy is generally more inclined to do something crazy, like roll down a hill or wee into a bottle, even if some things must remain a mystery. Like why I buy a balloon from a man selling balloons and don’t let him have a go. What am I going to do next? Buy a 99 Flake for myself and wear the cone on my head like a hat? I might.

In a world where helicopter parenting is on the rise and cotton-wool wrapped kids are warned strangers spell terrible danger, taking them to festivals not only gives them the space they need for their crazy little minds to roam free, I actually think it should be mandatory. It’s one of the few open spaces they’ve got left where adults are happy to let them play with actual people, people who’s names or backgrounds don’t matter, where everyone just stops stressing for once.

It’s also the one place where Brits start acting like our European counterparts. Anywhere you go in this continent, the locals welcome in children of all sizes with open arms. You can be pushing a buggy on the way back to your hotel at sundown in Bodrum, and the nightclub doorman will invite you in, free drinks for the little one. Meanwhile in the UK, we’re sat in a corner somewhere muttering: ‘They brought their kids. To a restaurant? Selfish bastards.’

But come festival time, the tune changes to ‘ooh, look at the ickle fat babba with the wings’. The Boy hates it when that happens. Even so, there is a part of him that laps up the unexpected attention random grown-ups pass his way. He is made to feel welcome. People on drugs are rather fond of seeing physical versions of their inner child floating around the place.

It’s no surprise that there are now so many children-friendly festivals around: Camp Bestival, Beautiful Days and Shambala being the three I would heartily recommend. Even if you don’t have kids, festivals that welcome children tend to be friendlier and less messy. Plus kids at festivals aren’t as annoying as you might think. They wake up stupid o’ clock certainly, but the laughter of children are a welcome wake-up call when you consider the soundtrack you went to bed to last night. A bunch of cokeheads wailing ‘Alan’ over and over again, a prolonged acid-fuelled misunderstanding that you want to throw a bucket of logic over, and most unforgivingly, somewhere not far away enough, some insufferable mook strumming Wonderwall.

Compared to the mass of unenlightened utterances that vomit all over Timothy Leary’s vision, it is nigh on heavenly to be woken by the sound of a sweet, innocent child chiding, “Daddy, Daddy, please wake up Daddy, I’m so hungry”.

Time to get the doughnuts in. And a balloon for Daddy.