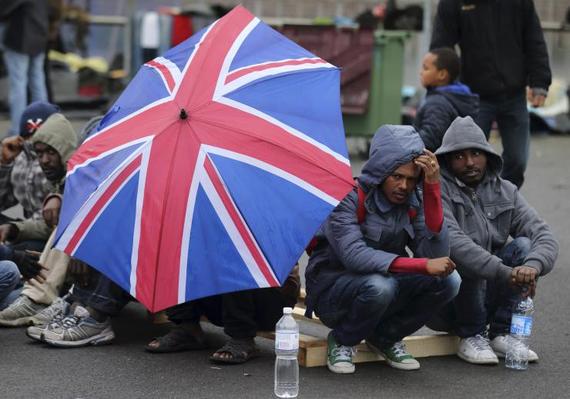 I certainly did when I landed here as a bud-budding teenager in the 80s. I loved everything about this country. The school dinners, the crap on telly, Phil Collins. And Britain made this Bangladeshi boy feel welcome enough, notwithstanding its casual racism and liberal minded folk’s need forbrown people to hail from a part of India they’d visited in their more mystical youth.

See, unlike my fellow British Asian brothers and sisters who were born here and react like psychopaths whenever you ask them ‘where are you from? No, I mean, originally’, I’d always accepted I was a foreigner. To bastardise that Sting song, ‘I’m an alien, I’m a legal alien, I’m a Bengali man in Brighton… I like my roti done on one side’.

I held onto my Bangladesh passport with pride. Not that I identified as a Bangladeshi, or that I didn’t feel British enough, more that I had the curious disposition of not wanting to belong anywhere. (Thanks for that one, Acid.) Like a lot of first and second generation immigrants who chose not to suffer stereotypes gladly, I found great joy in messing with people’s perception of me. In the 90s, when there was still this idea that Bangladeshi men came with bud bud accents and mullets, I rather enjoyed rocking up in my piercings, tattoos and mohawks to confuse some bastard who needed his pigeons to be in their holes.

Even after my parents got their British passports, I still maintained my Bangladeshi nationality. Way I saw it, I was hardly jet-setting and pretty much the only place I flew to – Amsterdam – I could get a visa within three days with my eyes barely open. But then 9/11 happened. Suddenly the problem wasn’t staying in this country, but trying to get out of it. (Being rejected by the USA I understand – I was still a Muhammad back then – but to this day I still can’t make sense of how or why I had my visa application to Morocco refused. It’s a Muslim country for Allah’s sake!).

And yet a whole decade passed by, which saw the introduction of stricter measures such as the Britishness Test and eye-watering fees for naturalisation, and still I hadn’t got round to getting my British passport. Thanks for that one, Weed.

A couple of years back, I finally got my shit together, dropped Muhammad by deed poll – never knew how to spell it anyway – and officially became British. Did I notice anything different? Absolutely. After years of being taken to one side and interrogated by men with machine guns, I could now glide past. I was finally living the British Dream. I could cheer for England. I could vote. I could be disappointed just like you.

And now, like every Brit with their scratchcard dreams, I’ve buggered off and moved to France. I am no longer an immigrant. I’m an expat. And few days in, I’ve already started to react to locals like a proper Brit. My best friend Celine Mailland – I give her full name to illustrate I’m not a racist, some of my best friends are French – already prepared me for the fact they don’t queue, don’t give a toss about time-keeping and could not give a fuck about anything that gets in the way of their me-time for doing fuck-all, but this I wasn’t prepared for.

I can’t tell the difference between French people’s legendary disdain for the Brits… and their rather more famous hatred of darkies. Muslim darkies, at that.

That man in the shop who looked at me funny today, was it because I was British or an immigrant? I’d forgotten this paranoia, having long bonded with people from all walks of life in clubs and fields all across Britain (thanks for that one, Ecstasy), but here I am, a stranger in a strange land again, not knowing whether I fit in, feeling alien.

Just today my friend Herve L’Hors, again I give his full name to remind you some of my best friends really are French, thought he’d do his bit to allay my fears by letting me know there’s a place not far from where I am called Bains des Pâquis. I’ll just let that hang in the air until you smell it.

So here I am, a native turned immigrant turned expat. Maybe the locals here don’t see me that way at all. Maybe they think I’m just another dark-skinned reprobate plotting to commit some petty crime or another, or a Muslim harbouring Charlie Hebdo style dreams of destruction. It could be I’m nothing more to them than just another stupid Brit they can rip off. Or maybe they just stare at me weirdly because of the culturally appropriate beret, stripy t-shirt and necklace of onions I’ve taken to wearing…

They can say what they like, to be honest. Like any true British expat, I don’t understand a bloody thing they’re saying…